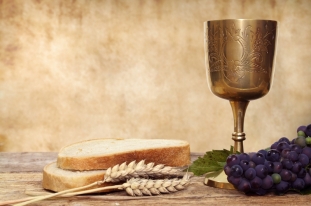 As you may recall from my last post, I mentioned the verse in Malachi that talks about God’s desire for food in His house. In modern times, many pastors have portrayed “food” in a figurative sense, meaning spiritual sustenance on the level of a sermon or discipleship. When we take a closer look at the scriptures, however, a more literal application comes to light:

At the end of every three years, bring all the tithes of that year’s produce and store it in your towns, so that the…foreigners, the fatherless and the widows who live in your towns may come and eat and be satisfied…(Deuteronomy 14:28-29).

We also see Jesus himself feeding people. In Matthew 14, he feeds a crowd of over 5,000 men (not counting their wives and children) with only five loaves of bread and two fish. In Matthew 15, he feeds 4,000 with seven loaves and a few other fish. Jesus obviously cared about people’s physical nourishment. Still does.

Then we read in John 21 about his command to Simon Peter: “Feed my sheep.” Again, this verse has been interpreted to mean that Jesus was calling Peter to preach the gospel. To be clear, I think this is a reasonable interpretation. After all, Jesus called himself the “bread of life,” and said that whoever “eats this bread” will live eternally. But I think ministers have unfortunately been too quick to separate the physical aspect from this spiritual command.

Let’s consider the context of John 21. Jesus has risen from the dead, but has not yet ascended into heaven. He comes upon his disciples fishing. They’ve been at it all night and haven’t caught so much as a minnow. He then tells them to cast their nets on the other side of the boat. They do, and haul up a mess of fish so big that they can’t even lift it into the boat.

Right as they drag this enormous catch of fish onto the beach, Jesus looks at Peter and says, “Feed my sheep.” Notice that this command comes on the heels of a great provision of food and remains distinct from the Great Commission in Mark 16, in which Jesus explicitly tells the disciples to preach the gospel. This is Peter’s official reinstatement into Christ’s discipleship after denying him at the crucifixion, but I also believe it was a special calling for Peter to oversee the physical provision for God’s people. Which may explain why the Early Church believers were so obsessed with sharing meals.

The physical and spiritual aspects of “eating” are closely intertwined throughout the scriptures. The first miracle Jesus ever performed was turning water into wine at a wedding. When teaching his disciples to pray, he told them to ask for their “daily bread.” The spiritual act of tithing in ancient Israel was to provide for the physical needs of priests and the poor. The apostle James called caring for widow and orphans “pure and faultless” religion (James 1:27). And, perhaps, most telling is the fact that Jesus chose a meal, composed of the most common dietary staples of his day, to commemorate his redemption of man.

Today, believers treat communion as a special event. My church holds communion the first Sunday of every month. Some churches hold it once every six months or year. But that’s not the example Jesus set for us. Think about it. Jesus could have chosen anything to represent his sacrifice for us. Pomegranates. Cake. Ambrosia. Something the people of the ancient world wouldn’t have seen every day. Instead, he chose bread and wine. Everyone in the ancient world, rich and poor, ate bread daily. Wine was about as common as water. And as Jesus passed these implements around to his followers, he said, “As often as you do this, do it in remembrance of me” (1 Corinthians 11:25).

As often as you do what? Eat bread and drink wine. In other words, Jesus was asking his disciples to remember him every time they sat down to eat together.

It is important to note here that these commemorative “love feasts” among Early Church believers were just that: feasts. It was a time of sharing and distribution by which poor believers received a physical provision of food from wealthy believers (see this commentary). This happened on a regular basis, probably daily (see Acts 2:46-47).

This reality may explain why the Apostle Paul warned believers not to eat with morally corrupt brethren (1 Corinthians 5:11). Not only would the unrepentant backslider be unable to partake of the Lord’s Supper in a worthy manner, but he or she might discourage reverence for Christ’s redemptive act or make a mockery of it. And people you eat with every day are likely to have a big influence on you.

My point is, when it comes to our remembrance of Christ, the physical and spiritual are inexorably linked. When we break bread together and share with the poor among us, we proclaim the good news of Jesus–that the provision he made upon the cross is for all people and the source of our equality. We are reminded, too, that Christ cares for the whole person, body and soul. And that when we trust him for our provision by adhering to his command to share with others, he multiplies our resources for his glory.

Jesus intended believers to live out this reality on a regular basis. After all, in taking communion, scripture says we “proclaim the Lord’s death until he comes” (1 Corinthians 11:26). Isn’t this something that we, as Christians, would do daily? Instead, the modern church has reduced communion to a once-monthly bite of bread and juice–and confine the poor to a separate table.

2 responses to “Feed My Sheep: Thoughts on Communion”