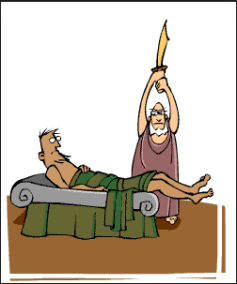 Procrustes will see you now.

You might have seen this this article in Christianity Today about making room for intersex people in the church. The writer, Matthew Anderson, reviewed a book on the subject by author Megan DeFranza to see if it would be a good resource for today’s conservative evangelical churches. Anderson’s conclusion? Nope, not really. DeFranza didn’t do enough to affirm the church’s position on gender binaries, traditional marriage, and sexual ethics. It was too much of a slippery slope.

Here’s the part that, for me, induced convulsive facepalming:

Using “sexual development disorders” to describe intersex conditions is only “marginalizing” if we think “sex identity” can be separated from our bodily reproductive capabilities, as the sexual revolution promised it could be. If, instead, we treat them as unfortunate, yet often correctable developments that have a pervasive effect on a person’s life and opportunities—as we do with other disorders—then they simply present one more opportunity for Christians to bestow welcome, compassion, and support, even while affirming the binary of male and female for theological reasons [bold emphasis mine].

These conditions can affect a person’s gender expression and, in rare cases, sexual orientation. Surgery can correct ambiguous genitalia, but there are risks. Children may grow up to identify with the opposite sex that was chosen for them, and surgery often results in a loss of sexual sensation. Hormone therapy can help gender expression, but it’s not a cure-all. And many intersex conditions cause infertility.

Yet Anderson says the church should treat intersex conditions as “correctable developments” in order to show intersex people proper love and support. To say they aren’t correctable is to play into “the sexual revolution’s obscuring of the inherent reproductive design of our bodies.” Never mind that chromosomal differences aren’t correctable by any means, or that surgical corrections will be largely cosmetic only.

Anderson’s article brilliantly illuminates the issue that has always plagued, and continues to plague, conservative evangelicalism: the inability to welcome or show grace to those who, by the nature of their uniqueness, challenge long-time, deeply held dogma. Gosh darn it, the Bible says God made them male and female and that’s the only answer I will accept! Otherwise, we’ll throw open the doors to polygamy and polyamory and reject the maleness of Christ as essential to redemption. Yes, Anderson says this, almost exactly.

The problem is a theology that is built around the “binary of male and female.” Basically, Anderson claims that our ability to understand the gospel hinges on adhering to strict gender binaries. Jesus is male, God is male, the head of the church and home is male, the relationship between Christ and his church is illuminated by the monogamous marital union of males to females. Men become pastors and breadwinners; women submit, keep nursery and raise the kids. The whole evangelical enterprise is organized around these beliefs.

Throwing an intersex person into the mix just raises all sorts of uncomfortable questions. Is it ok for someone with ambiguous genitalia to pastor a church or teach a study group? If a straight person marries a hermaphrodite, is gay sex occurring? How much submitting is an intersex person required to do in their marriage? And if intersex people can get biblically married, what does that say about our understanding of Christ’s relationship to the Church?!

Nope. It’s just better not to ask such questions. Too messy. The whole gender essentialism house of cards might implode. In Anderson’s view, intersex people can either squeeze into a gender binary–however impossible that is–or they can remain outside the church.

It reminds me of a story I heard once…

Another time Jesus went into the synagogue, and a man with a shriveled hand was there. Some of them were looking for a reason to accuse Jesus, so they watched him closely to see if he would heal him on the Sabbath. Jesus said to the man with the shriveled hand, “Stand up in front of everyone.”

Then Jesus asked them, “Which is lawful on the Sabbath: to do good or to do evil, to save life or to kill?” But they remained silent.

He looked around at them in anger and, deeply distressed at their stubborn hearts, said to the man, “Stretch out your hand.” He stretched it out, and his hand was completely restored. Then the Pharisees went out and began to plot with the Herodians how they might kill Jesus. ~ Mark 3:1-6

That was the problem with the Pharisees. They couldn’t show love or grace to anyone without first ensuring that such an act didn’t violate the purity of their theology. In their minds, healing could be viewed as work, and their law said to refrain from all work on the Sabbath. Never mind that this man was maimed. Never mind that his healing would have brought great glory to God. The Torah said not to work, and, by golly, they weren’t going to risk any of their brownie points with the Almighty by wandering into a theological gray area.

And Jesus said, “Guys, you’ve totally missed the point. You’ve made an idol out of that which God created for His pleasure and your enjoyment.”

It’s what I’m saying. It’s what many of my fellow progressive Christians are saying. Any gospel that doesn’t have room for intersex people isn’t the gospel. Conservative evangelicalism has made idols out of the things God created for His pleasure and our enjoyment: sex, marriage, family, and gender. The Imago Dei isn’t found in our genitalia or gender expression. It is found in our whole selves: mind, soul, body and spirit. But instead of allowing those who don’t fit the binary to challenge our theological assumptions and open us to the full depth and beauty of God’s grace, conservative evangelicals would rather cling to their tired claims that unconditionally welcoming such people threatens the purity of their faith.

The only problem is, a faith that doesn’t have love for others at its center is no faith at all.

20 responses to “Why I’m Fed Up with Conservative Evangelicalism”