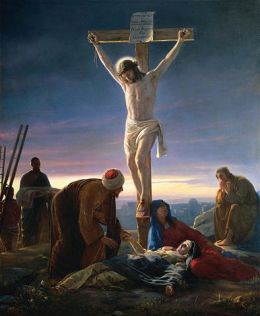 If you were anywhere near Twitter in the past two days, you may have seen that the Council for Biblical Manhood & Womanhood (CBMW) recently held their annual conference in Louisville, KY. CBMW was founded by John Piper in the late 1980s to promote “biblical gender roles” within Christian homes and churches–meaning, primarily, that women are not permitted to lead at any time within either sphere.

A couple of my fellow tweeters picked up on the conference hashtag and decided to tweet their own messages to the conference goers. I had a bit of fun with this, too, tweeting messages like, “My spiritual covering comes from Christ, not my husband (1 Tim. 2:5)” and “A friendly reminder that adherence to wealthy Greco-Roman household hierarchies is not a requisite for salvation.”

The truth that struck me as I saw the messages coming from the conference leaders is just how scandalous the cross really is to their doctrine–and, really, all doctrine. You have these men claiming that complementarian marriage is, biblically, the best representation and defense of the gospel, and yet there hangs Jesus–unmarried, exposed, abandoned, humiliated, defiled. There’s no way around it. Anything we proclaim to be the gospel filters through the cross. And the cross shows us something so shocking, so scandalous, that some people still struggle to come to grips with it.

Jesus was the Messiah proclaimed from the Old Testament. His duty, in the eyes of the Jewish leaders, was to explain the Mosaic Law. Some believed he was also coming to judge those who had not kept the Law and to free the Jews from Roman occupation. The Messiah would be the ultimate Jew. He would perfectly fulfill all 613 commandments in the Torah, be recognized for his divine authority, rally all of his people to his side, and establish a kingdom that would reign for millennia. And here comes this glorious King, the Judge of all the living and the dead, in…

…a dirty feed trough. Birthed to an unwed teen mother.

And his kingdom is not earthly, but unseen.

And he tells people that he has all authority to judge, but that’s not why he’s here this time. He’s not here to keep the Law, but to perform the ultimate act of love that will render the Law powerless to condemn.

He has come to conquer by being conquered.

He has come to grant life through his death.

Those who want to save their lives will lose them. The first shall be last. The one who wants to rule must become a servant. The meek shall inherit, the insulted blessed, the humble exalted. His power is made perfect in weakness. Loss is gain. He will build by tearing down.

Suddenly, everything is upside down. All expectations for a grand earthly kingdom and clarified rituals for achieving righteousness are shattered.

There are those who are still holding out hope. They think that the gospel exists to create a theocratic utopia. They believe Jesus is coming to grant them ruling power over the “lesser thans.” I find it hysterical that some of these holdouts tout the moral necessity of preserving the nuclear family when Jesus said, “I have come to turn a man against his father, a daughter against her mother, a daughter-in-law against her mother-in-law” (Matt. 10:35) and “Everyone who has left houses or brothers or sisters or father or mother or wife or children or fields for my sake will receive a hundred times as much and will inherit eternal life” (Matt. 19:25).

Honestly, I think the most scandalous scripture in the Bible is Romans 5:8:

But God demonstrates his own love for us in this: While we were still sinners, Christ died for us.

Jesus was supposed to (in the eyes of the Law keepers) come and judge our wickedness. He was supposed to pour out God’s wrath on us for being such terrible sinners. Instead, he shows up and says, “I’m redeeming all of this.” Then he feeds the hungry, heals the sick, cures the blind, and rips the veil separating God’s presence from humanity. No more sacrifices. No more priests. No more curse. No more rituals. Just him.

No Way Around It

Today, we have teachers looking at Ephesians 5 and similar scriptures to determine the best way to demonstrate and defend the gospel, when the true gospel is so offensive that it requires no defense. There is nothing family-friendly in a Savior that calls us to take up our own Roman torture device of death and follow him through the jeering crowds of enemies we’re commanded to love. There is nothing timid in his subversion of earthly hierarchies and inversion of the status quo. Three kids and a stay-at-home mom? Genitals that match one’s genetics? You’re playing in the kiddie pool, friends. You’re defending a weaker gospel. You’re concerned with another kingdom.

The cross is an affront to you, because it achieves true transformation at the cost of all earthly power, position, favor and glory. The cross demands we lay aside all ego and self-reliance and do the thing that seems most antithetical to achieving our aims. Because it’s not our aims that we’re trying to achieve, but God’s.

And God’s Kingdom is upside-down.

6 responses to “The Scandal of the Cross”