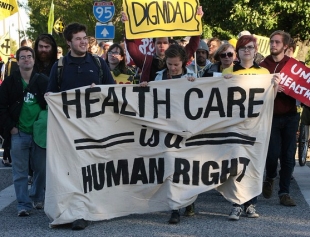 “Why do you have to get all political on us?”

“I don’t like the way your social media has become so political lately.”

“Why don’t you leave politics alone and just preach the gospel?”

Statements like these have been leveled at several of my fellow Christian female bloggers lately. (Not so much at me. I’ve always been political. 😉 ) But it’s something that has caught my attention. In a way, it’s true: writers like Rachel Held Evans and Jory Micha appear to be making more political statements. I’ll be the first to admit I’m guilty, too. I’ve tweeted a lot about my opposition to Trump’s presidency. A LOT.

But I’m not sure some of us are being any more political than usual. Many of us have always preached food for the hungry, room for the refugee and justice for the poor. It’s just that today, we find ourselves in a society in which feeding the hungry and healing the sick have become political acts.

Jesus once found himself in such a place. In Luke 13, he’s preaching at a synagogue when a crippled woman comes into the room. Now, in Jesus’ day, illnesses and disabilities are viewed as God’s punishment upon that person or their family for some kind of sin. Their only hope of being healed is to bring the right offering to the temple and be declared “clean” by the priests.

Don’t have an offering? Too bad. God doesn’t heal you when the priest prays? Too bad. You’re doomed to live on the margins until something changes.

So in comes this woman. She’s been bent double by an evil spirit for 18 years. And it’s the Sabbath. The law says people can’t work on the Sabbath. What is work? Well, the priests get to decide that. They are the gatekeepers, and their standard of living depends on keeping certain people relegated to the margins. If you get accused of working on the Sabbath, they could have you arrested, tried and executed. And then your stuff would likely become their stuff.

People stay sick and afraid and keep bringing offerings to the priests.

Funny how that works.

But Jesus is having none of it. He sees this woman and feels compassion for her. Here is a person made in his Father’s image, who is clearly suffering and needs help. So he touches her and she stands up straight. She’s healed. And, oh boy, does she celebrate.

The priests are pissed. Jesus has just interfered with their system. He has healed a woman whom God (supposedly) had decided to punish. And not only did Jesus not go through the proper channels or rituals to do so, but he did it on the priests’ only day off! He has flaunted their authority and stolen their glory. He has thrown the dominant narrative into question and shown the people that there is another way.

Notice: it’s typically after these “healing on the Sabbath” episodes that the religious leaders start plotting to kill Jesus. This upsets them more than almost anything else.

In America, where capitalism is praised as the most moral system of economics, we have a dominant narrative as well. This narrative says that if a person is poor, it is because they haven’t worked hard enough or made the right decisions. So if someone can’t afford food or medical care or housing, it’s their own fault, and giving them these things only enables them to keep being lazy and irresponsible. On the other hand, paving the way for already wealthy people to acquire more money rewards hard work and motivates poor people to try harder to succeed.

Because of this narrative, we have dozens of people in Congress–our gatekeepers–working to slash aid for the neediest among us in order to further reward the rich. It’s no coincidence that the gatekeepers of this narrative are the ones primarily benefiting from its existence. They get to choose who stays in the in-group and who gets relegated to the margins. And they do not respond kindly when people challenge this narrative.

In an environment like this, healing the sick becomes a political act. It interferes with the system. It affirms the inherent worth and dignity of people whom the gatekeepers have declared unworthy. When you raise your voice in a capitalist society-turned-oligarchy-turned-kleptocracy and say, “All humans should have food” or “All people should be able to see a doctor when ill and not go bankrupt from it,” you’re no longer just making moral statements. You’re opposing the dominant narrative. You’ve now become political.

“Why do you have to be so political?” Because the dominant narrative in our society stands in direct opposition to the teachings of Scripture, and it’s being peddled by many who claim to know Jesus. It shouldn’t be a political act to say that all people are made in the image of God and, therefore, deserve kindness and mercy. But that’s what it has become.

So I’ll preach until it’s no longer political to say such things. Then I’ll preach some more.

11 responses to “When Healing the Sick becomes a Political Act”